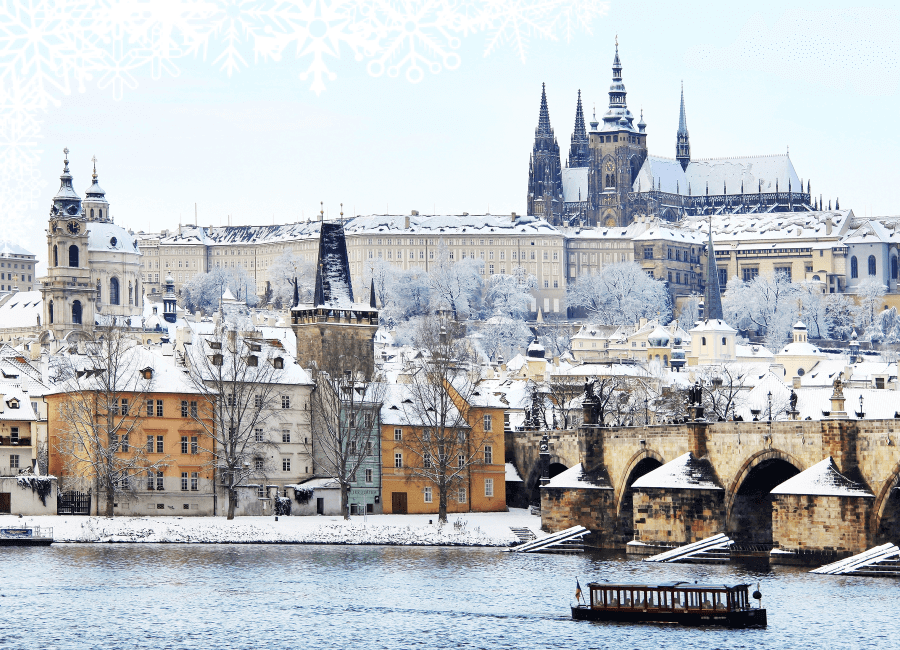 Why the Czech Republic is the ultimate Christmas destination

Boasting a short flight time and plenty of fabulously festive cities to explore, a winter getaway doesn’t get much better than a trip to the Czech Republic

With its idyllic snow-covered landscapes and welcoming towns bursting with cheery festive decorations and delightful delicacies aplenty just waiting to be sampled, the Czech Republic truly is a winter wonderland. In fact, so many have been swept up by its charm, it’s now one of Europe’s premier Christmas destinations.

Whether you want to enjoy delectable local cuisine in a picture-perfect city or you’d rather indulge in a morning of winter sports in the serene mountains, a winter holiday here really does offer something for everyone. Read on to discover how the Czech Republic could have you feeling merry and bright this festive season…

The gift that keeps on giving

If you’re keen to do a spot of Christmas shopping, you’ll be spoilt for choice here, as beautiful handmade products can be found on almost every corner. Ornate wooden toys and hand-painted Christmas decorations are particularly popular, as are homemade jams, syrups and biscuits. In fact, it’s a Czech tradition to bake as many Christmas biscuits as possible, with locals preparing them weeks in advance and stashing them away until the big day comes around.

The Czech Republic is also renowned for its delicate glass Christmas decorations, so much so, the glass blowing often begins long before the festive season, with the production and painting of each decoration starting in spring. The Crystal Valley region in Northern Bohemia is also well-known for its Bohemian crystal, particularly Rautis – the only company in the world to make decorations from blown glass beads. These decorations are so unique, they were placed on the UNSECO intangible cultural heritage list in 2020.

If you’re buying gifts for children, The Little Mole is a small Czech hero and a true original. Designed by legendary Czech illustrator Zdeněk Miler and based on the synonymous 1957 cartoon series, The Little Mole remains immensely popular throughout the country thanks to his serious charm and is now available to buy in all sorts of formats, from soft or wooden toys to marzipan and gingerbread!

Those who love a spa break or a regular pamper will no doubt love the decadent items sold by luxury brand Chateau Mcely. Each product is manufactured especially for the five-star chateau hotel, which can be found just outside of Prague, but you can buy many of the products on site. Of course, if you’re looking to really indulge somebody special, you can’t beat the elegant crystal decorations and masterfully crafted costume jewellery that comes from the foothills of the otherworldly Jizera Mountains. The local Preciosa brand is a particular highlight, having found global success with its stunning crystal jewellery, refined rings and intricate ornaments.

Another world-famous Czech delight is the herbal liqueur, Becherovka. Renowned for its soothing effects on the digestive system, it’s considered to be one of the Karlovy Vary ‘healing springs’ and has been drunk during family celebrations – and used as a digestif – since 1974. It’s hard to come by in the UK, so you can be sure it will make for a unique and special gift.

Winter is the perfect time to tuck into some of the Czech Republic’s hearty traditional dishes. Goulash, a stew of meat and vegetables seasoned with paprika and other spices, and svíčková, sirloin steak prepared with vegetables and spices and boiled with double cream, are just a couple of the country’s celebrated specialities. A warming bowl of soup is also always on the menu, particularly kulajda. This family favourite is full of mushrooms, potatoes, boiled eggs, dill and soured cream, and is as comforting as it gets.

Another highlight is kuba, a Czech take on risotto, that’s made from barley and mushrooms. This dish was originally eaten on Christmas Day, when meat was not allowed, but these days you’ll find families up and down the country tucking into fried carp with potato salad instead. The carp comes especially from the Třeboň region in South Bohemia and is farmed in the hundreds of ponds found in this idyllic part of the country. If you fancy a little sweet something, give knedlíky a try. Made with a dough similar to the one used for bread, these delicious dumplings can be filled with the fruits of your choosing. They really are a treat!

Where will you go?

From Prague, Europe’s Christmas capital, to Plzeň, the birthplace of pilsner lager, you can be sure each of the Czech Republic’s remarkable cities will be alive with festive spirit. Here are four of the best.

Thanks to its famous cafés, Prague should be at the top of the list when it comes to foodie destinations. For coffee with a view, you can’t beat Café Slavia. Sitting on a sublime spot on the bank of the Vltava river, opposite the National Theatre, you can sip on quality Fairtrade organic coffee while looking out over the iconic Prague Castle. Another gem is the Czech Cubist house of Dům U Černé Matky Boží (House of the Black Madonna) and its restored Grand Café Orient – the only Cubist café in the world. The custard-filled choux pastry, vêneček, that’s sold here is a must-try as, in a charming nod to Cubism, it’s executed as a square rather than the usual circle.

Another favourite amongst locals is Café Louvre at Národní Třída, where visitors can enjoy the unique atmosphere of the early 20th century while getting stuck into traditional Czech dishes. This area is a real cultural hub, so when you’ve finished dining, there are lots of places to explore, with Museum Kampa, the National Gallery and the Franz Kafka Museum all close by.

Brno: a festive gem of functionalism

Of course, Prague isn’t the only Czech town renowned for its café scene, the lively and progressive city of Brno is equally spectacular. Along with striking modernist architecture, you’ll find a string of culinary hotspots including the Café Savoy – inspired by sophisticated French coffeehouses – and the stylish Cosmopolis Café, renowned for its seriously indulgent cakes and desserts.

If it’s a functionalist cafe and restaurant you’re after, then the vibrant Café Era, complete with its bright décor and traditional Czech menu, is worth a visit. From there, you can continue on a tour of the city’s functionalist architecture with a visit to the UNESCO-protected Villa Tugendhat and Villa Stiassni, where Fidel Castro once stayed.

Olomouc: marvel at the tallest structure in the Czech Republic

Olomouc, the second largest conservation area in the Czech Republic, has a myriad fascinating places to explore with monastery, temple and museum tours available, though the jewel in its crown is undoubtedly the Holy Trinity Column in the city centre. The column is 35 metres high, making it the tallest sculpture in the Czech Republic. It even has a small chapel inside – it doesn’t get much more festive than that!

There’s also the striking St Wenceslas Cathedral, which has the second tallest church tower in the Czech Republic (100.65 m) and the largest bell in Moravia. For a bit of culture, there’s the Museum of Art, which exhibits modern works in a beautiful Art Nouveau building, or the legendary pub, Ponorka. Meanwhile, science buffs will relish Pevnost Poznání, or rather Fort Science, the first interactive museum of its kind in Central Moravia. Olomouc really does have something for all tastes.

Plzeň is known around the world for its beer, and winter is the perfect time to learn all about its history – not least because you’ll get to warm up with a few frothy pints! The Brewery Museum, which houses models of old breweries and features a modern-day bottler, hosts beer tastings in its historical 15th-century cellar. The Plzeň Historical Underground tour also starts in the museum, and will allow you to explore the medieval network of vaulted subterranean tunnels, wells and store houses built under the city centre. You’ll also want to check out the glass-fronted Pilsner Urquell Brewery, which brewed the very first pilsner lager back in 1842 and today runs tours of its brewing cellars and bottling plant.

This bustling city centre is also home to Plzeň’s Great Synagogue, the largest synagogue in the Czech Republic, the second largest in Europe and the third largest in the world. Other architectural delights include the formidable St Bartholomew Cathedral, the tallest church tower in the country. Standing at more than 100 metres high, you can climb up its 300 steps and take in stunning views of the city and beyond.

Want a taste of the action?

Around the Advent season, kitchens in almost every Czech household are transformed into bakeries. And when it comes to making biscuits, it’s definitely a case of the more the merrier, as everyone gets involved. Different recipes are often inherited and handed down through the generations of every family, though linecké cukroví, delicate ground walnut and gingerbread pastries laden with jam and vanilla, are particularly treasured. Want to get your hands on this wonderfully festive – and seriously delicious – recipe for yourself? Just click below!